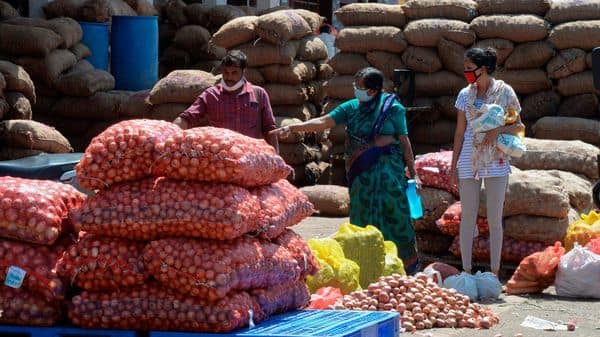 New Delhi: A sudden ban on export of onions has come as a rude shock to farmers in the largest growing state of Maharashtra who had stocked their winter harvest hoping for a better price. A day after the centre prohibited exports, wholesale prices crashed on Tuesday.

On Monday, farmers sold onions at prices between ₹3,500 to ₹4,000 per quintal but today it crashed to ₹1,500-2,000 per quintal, said Hansraj Wadghule, a farmer leader from Nashik, Maharashtra. “The next crop will start arriving in markets in a month when prices are likely to fall further. We will start our protests against the export ban from tomorrow," he added.

Onion growers are now ruing the short window of opportunity they lost. During the prolonged lockdown most growers sold their harvest at a loss—for ₹7-8 per kg compared to production cost of ₹10 per kg. Following heavy rains and high moisture some of the stored crop and part of the kharif plantings were damaged. This led to a rise in wholesale prices and farmers were hoping to recover their losses from the stored onions.

“No one came to our rescue when we were selling at a loss, now the government won’t let us recover part of our losses from the stored onions (about 25% of the produce)," said Deepak Pagar, an onion grower from Nashik. “The truth is the government does not care about farmers, it is more concerned about keeping prices low for the consumer," Pagar added.

“The government can no longer impose a stock limit on traders (after the new ordinance amending the Essential Commodities Act) so an export ban is its only tool to keep wholesale prices in check but at the cost of farmers," said a Nashik based procurement officer for a major retail chain who did not want to be named.

Other than Maharashtra, wholesale onion prices in Indore, Madhya Pradesh, fell by ₹600 per quintal a day after the ban was announced.

Estimates from the agriculture ministry show that onion production rose to 25 million tonnes in 2019-20 compared to 22.5 million tonnes the year before. Between April and June, India exported 0.68 million tonnes of onion, a 23% rise year on year.