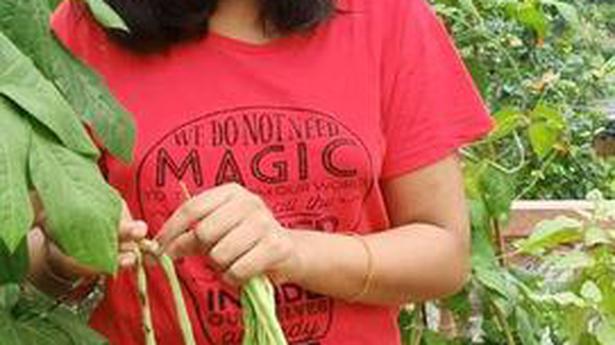 Sulfath Moideen, a home maker at Edavanakkad and a veteran terrace farmer, and P. Krishna Theertha, a Standard VII student of HDPY Senior Secondary School, Moothakunnam, hailing from Madaplathuruthu in Vadakkekara panchayat, have earned top positions in their categories in the annual State Karshaka Awards announced on Wednesday.

While Ms. Sulfath has more than three dozen awards under the belt for her farm ventures in over 27 years, recognition has come to Ms. Theertha for the first time. Both are delighted with the way their efforts have borne fruit despite the pandemic situation.

Ms. Sulfath won the first prize for terrace farming of vegetables, while Ms. Theertha is the third best student farmer in the State. The veteran farmer has around 600 pots and bags on her 2,500 sq.ft. terrace. The vegetables being cultivated include vegetable cowpea, okra, bitter gourd, green chilli, tomato as well as tubers like yam.

Ms. Theertha had her farming skills sharpened by her mother, who is an enthusiastic farmer herself. She said she had been cultivating all types of vegetables on the terrace of her home. The lockdown left her with a lot of time to engage herself in the hobby she loves best.

Ms. Sulfath said she had won 36 awards, including the first prize in the district for the vegetable cultivation programme ‘Onathinu Orumuram Pachakkari’. She started her farming activities at the age of 17 and since then has been an enthusiastic farmer.

Besides the 2,500 sq.ft. terrace, she cultivates on 1.5 acres, where vegetables and bananas are grown. She also keeps goats, chicken, quails as well as ornamental fish varieties.

St. Mary’s UP School, West Cheranalloor, won the award for the best educational institution in the vegetable cultivation category. The other farm award winners from Ernakulam include K.I. Isaac, who was chosen as the second best vegetable farmer in the State. He hails from Thiruvaniyoor, a village renowned for its vast areas under vegetable farming. The district also won two Haritha Keerthi Awards for the government farm at Aluva. Honours have also gone to Lissymol J. Vadakkat at the Aluva farm and Bincy Abraham, ADA, Kalamassery.