Weather update and forecast for January 17 across India 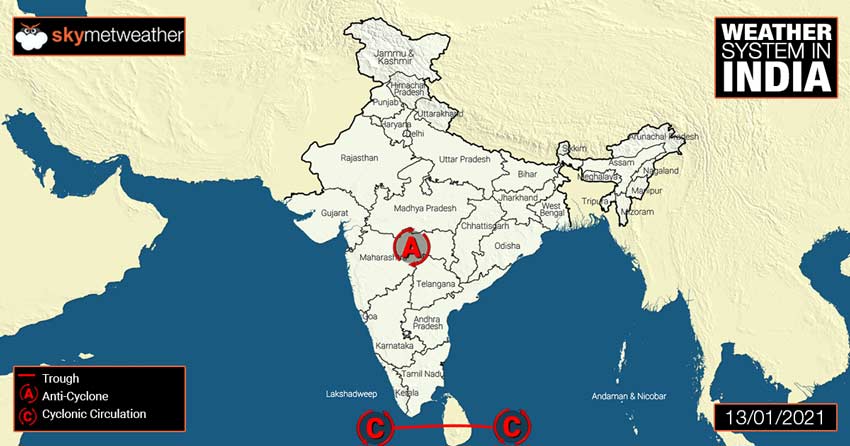 Weather update and forecast for January 17 across India

A cyclonic circulation is near the equator in the southern Arabian Sea and the adjacent Indian Ocean. A trough is also extending from this seasonal system to the Comorin region.

Another cyclonic circulation is seen over the states of eastern India and adjoining areas of Bangladesh.

There has been some slowdown in the speed of northwest winds, especially in parts of northwest India, due to the decrease in wind speed, the minimum temperature has increased.

Weather Activity in the last 24 hours:

During the last 24 hours, rainfall in parts of South India has decreased. There has been light to moderate rainfall in many places in southern Tamil Nadu and torrential rainfall in some places. In Tuticorin 298 mm of heavy rainfall was recorded over a period of 24 hours.

During the next 24 hours, rain activities in Kerala and Tamil Nadu will reduce considerably. Light to moderate rains are likely to continue in some parts of Lakshadweep for the next 24 to 48 hours.

Cold-day conditions are expected at many places in Punjab, Haryana, Delhi, Uttar Pradesh, Bihar and parts of northern Rajasthan during the next 24 hours. After 24 hours, there will be a slight rise in the day temperature, which will provide some relief from the severe cold.

There is a possibility of a slight drop in the minimum temperature in North West and Central India. Moderate to dense fog is likely to prevail on 17 January in many places of Punjab, Haryana, Delhi, Uttar Pradesh, Bihar and Northeast India.