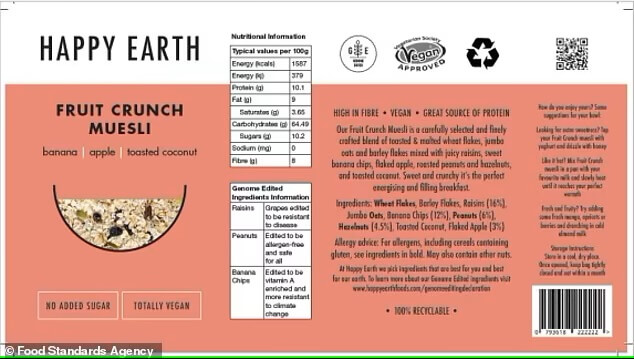 On 23 May, the Daily Mail announced plans by the UK Government to speed up production of gene edited crops in response to the food security crisis caused by the Russian invasion of Ukraine. Gene-editing aims to produce crops which are more disease-resistant, or to boost the resilience and yields of livestock, the article explained, adding that “it differs from genetically modified (GM) produce – dubbed Frankenfood – in that it alters the existing DNA of a plant or animal, rather than adding DNA from different species.”

Two days later, on 25 May, the same organ screamed “Fury over plans for gene-edited ‘Frankenfoods’ to be sold UNLABELLED in UK”, as an apopleptic Sam Tonkin raged against plans to allow gene-edited foods to be sold unlabelled in British supermarkets, flying in the face of Government polling which showed most consumers want labels for gene-altered products.

The polling referred to was conducted by the Food Standards Agency, and showed that 84% of consumers, when asked, said it was ‘very important’ or ‘fairly important’ for gene edited products to be labelled.

As the ground-breaking Precision Breeding Bill makes its way through Parliament – the first time in more than 20 years that legislation has come forward to encourage, rather than restrict, genetic innovation in agriculture – the issues of labelling and consumer choice can be expected to figure prominently in the debate.

And quite rightly – transparency and freedom of information in the use of these techniques will be hugely important in fostering public confidence and trust.

But it is equally important that these issues are discussed in context, and not simply based on Mr. Tonkin’s angry shoppers demanding to be ‘given a choice.’

First, ask any group of shoppers if they want more information about the way their food has been produced, and most will say yes.

If the Food Standards Agency had asked the same questions about radiation-induced mutagenesis, or cytoplasmic male sterility, or embryo rescue, I’m pretty sure they would have received the same response.

These are all modern, laboratory-based plant breeding methods used to develop improved crop varieties currently grown in both conventional and organic farming systems.

Equally the FSA polling did not make it clear to respondents that statutory labelling would inevitably drive up the cost of foods produced using gene editing.

When the whole basis for this new legislation is to diverge from unscientific rules imported from the EU, and to make it clear that gene editing simply accelerates the development of products which could have occurred naturally or through conventional breeding, what would labelling actually achieve?

Higher food prices for those who can least afford it in a cost of living crisis is the simple answer.

But there is another important reason why the Government should not insist on labelling. It cannot be enforced. Because gene editing simply speeds up what could have been achieved conventionally, there are no reliable tests available to distinguish between gene edited and conventionally bred material, so a statutory labelling requirement would not be practicable.

Of course transparency is key, and the Government have made it clear that a public register of gene edited products will be maintained.

But because the products of plant breeding have such a strong and demonstrable track record of safety, the provision of consumer choice – for example in relation to specific crop varieties – is a matter for consumers and the market place, not for regulators.

Similarly, the supply chain is able to service a range of product channels with different labelling and/or quality requirements, including:

And given the consumer-focused nature of many of the gene edited traits and products under development, such as gluten-free wheat, healthier vegetable oils, non-browning apples and potatoes, it is likely that these products will command a premium in the market place, and therefore equally likely that segregation will be proactively maintained within the agri-food supply chain to protect that added value.

In my view, the purpose of statutory labelling should be to protect consumers, for example in relation to nutrition or presence of allergens, not to flag a specific production method.

The recent Hepatitis A outbreak in the United States and Canada linked to fresh organic strawberries, and analysis of Food and Drug Administration food safety recall data in the US showing that organic products are four to eight times more likely to be the subject of a food safety incident, underline public health concerns that reliance on animal faeces as a fertiliser and inadequate control of mycotoxin-causing crop pests and diseases give rise to increased food safety risks. That is just a scientific fact.

So it could be argued that consumer health warnings on all organic products would be a more proportionate and science-based use of labelling than singling out perfectly safe methods of genetic improvement which are urgently and increasingly needed to tackle the looming food and climate crisis.